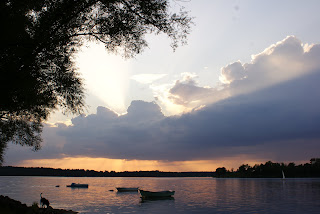 The pattern of God’s intention to magnify his strength in the context of human need is pervasive in the Scriptures–as pervasive there as it is counterintuitive to our pride. Yet if we are to conform our thinking to God’s thinking–to “think God’s thoughts after him”–we would do well to meditate our way through this pattern in the Scriptures and begin shaping our thinking and our praying in the Scriptural direction. God has chosen to magnify himself not in spite of, not in addition to, but through the context of human weakness. Here are a few Biblical examples that come to mind:

God chose a childless man and wife, Abram and Sarai, to be the father and mother of his people. And after choosing them, he waited until they were well past child-bearing age to grant the miracle of a son. It’s also worth noting that the proximity of nephew Lot in the Genesis story reveals that God could easily have chosen another line in Abraham’s family tree that was not barren. Why the contrast? In their extreme weakness, God showed himself strong.

God chose the younger brother Jacob, rather than the older brother Esau, to be the father of the twelve tribes of Israel. Being the younger brother would have been a “weaker” position in that culture. Its also worth noting the contrast–Esau is the strong man of the field, while Jacob is the “weaker” man, living among the tents. Jacob is also in danger from Esau and then from Laban and then from Esau again–yet Jacob fathers the twelve tribes that become the nation of Israel. In Jacob’s weakness, God showed himself strong.

God chose to raise Joseph to an extreme position of worldly power in order to save his family from famine only after he had been thrown into a pit, sold as a slave, falsely accused, and forgotten in prison. Why didn’t God just launch Joseph directly into a position of power, right after his dreams foretold his future prominence? In Joseph’s weakness, God showed himself strong.

God chose to commission Moses as the deliverer of his people after Moses failed in his own attempt to deliver God’s people, after he lived in exile for 40 years as a forgotten shepherd, after Moses was so aware of his weakness that it led him to the opposite sinful extreme of resisting God’s call. Why didn’t God commission Moses right after he killed the Egyptian–in the midst of his youthful ambition and power? In Moses’ weakness, God showed himself strong.

God chose Gideon–by self-admission the weakest man of a small family–to defeat the mighty Midianite army. And he only allowed Gideon to fight after he had reduced his army from 32,000 to 300. Why didn’t God choose a “stronger” man from a “stronger” family with a larger army? In Gideon’s weakness, God showed himself strong.

God chose Hannah–the barren wife of a man with children from another wife–to be the mother of Samuel the great prophet. Why not choose the wife who was not barren? Why not allow Hannah to conceive prior to her famous desperate prayer at the temple? In Hannah’s weakness, God showed himself strong.

God chose David to be a giant-killer, and then king, and ultimately a great foreshadowing of Jesus Christ–even though David was the youngest son, left in the fields tending sheep, when Samuel the prophet arrived. Why not choose the oldest son, or any of the older sons who had joined the army with Saul, to defeat Goliath, to ultimately become king? They still would have been from the tribe of Judah and from Bethlehem. In David’s weakness, God showed himself strong.

God chose Hezekiah’s desperate prayer, not his kingly prestige or power, to be the precursor to the Divine destruction of the Assyrian army. Why not allow the Israelite army to defeat their enemy on the field of battle? In Hezekiah’s weakness, God showed himself strong.

God chose Peter as the initial leader of the church, recommissioning him after he had denied the Lord. The one who would not confess Christ to three single questions would eventually proclaim him boldly to a crowd of thousands. Why not choose a disciple who had not failed so miserably? In Peter’s weakness, God showed himself strong.

God chose Paul, the great persecutor, to become the great apostle to the Gentiles, after he had been blinded by his vision of the risen Savior. Why not allow Paul to know Jesus before his death? Better yet, why not plan for Paul to be one of the original disciples? In Paul’s weakness, God showed himself strong.

And the greatest example of all–the great substance to which all the Old Testament patterns point and that all the New Testament examples reflect. God chose Jesus Christ, fully God, to provide salvation through the weakness of an agonizing death on a cross. Indeed, as Paul says, the cross is foolish to this world, since, to paraphrase a thought from D.A. Carson, no human wisdom could imagine a crucified messiah, triumphing in power precisely because he dies in weakness. As the hymn declares: “Well might the sun in darkness hide, and shut his glories in; when Christ the mighty maker died; for man the creature’s sin.”

What can we take away from this Biblical pattern–especially seeing its pinnacle in Jesus Christ, the mighty maker, surrendering his life willingly to death on the cross?

Rather, we should be amazed at the mercy of God in showering provision on us, even in areas that we assume are self-sustained. His strength is seen in my weakness, whether I see it or not. We should realize that human pride and self-confidence are far more evil than we normally think and that God’s glory is more paramount than we can possibly imagine. If I’m still breathing, His strength is seen in my weakness, even when I deny my need for him. We should repent of any areas of our life where we live in self-confidence–for my part, I find idols of sleep, entertainment, food, and ease frequent substitutes for dependance on God. His strength is seen in forgiving me, powerful grace in the face of my overwhelming sin. We should search out new ways to declare our dependance on the Lord, so that we can boast in his strength with fresh vigor. We should anticipate moments where we feel our weakness as a mercy from the Lord, opening our dim eyes, and inviting us to cry out for his strength. And, most importantly, we should worship the Lord of glory, who glorified himself by creating this pattern of providing his strength in the context of human weakness. He surrendered himself in weakness to death and showed the glory of God’s salvation. He delights to sustain any who call out to him. He gladly offers his merciful power and almighty grace even to those who have spent a life time trusting in themselves.

Lord, make me, like Paul, glad to boast in my weakness, that your power may rest upon me. Forgive the recent pattern I see in my life of trusting in my own strength and the life-long pattern of denying my need for you. Thank you for making your mercy new every morning and for being always a present help in my need. Help me to long for your strength more than the ‘sense’ of my own power. Help me to glorify you by boasting in your strength. Receive all the glory, Lord. All that I have accomplished you have done for me. Your name alone do I honor.

On Christ the Solid Rock I stand; All other ground is sinking sand.

For by grace you have been saved through faith.And this is not your own doing; it is the gift of God, 9 not a result of works, so that no one may boast. Eph. 2:8